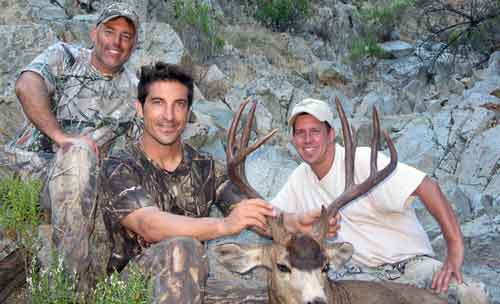 Ben Myhre
Ben Myhre is entering his eleventh year of involvement with the mule deer management program on Catalina Island. He stepped on the Island for the first time in 1998 and has been a mule deer guide ever since. Ben has been involved in the outfitting business and active in wildlife management for over 23 years in California.  Most of his guiding has been for California mule deer on Catalina Island. However he has also guided groups in search for wild pigs, turkeys, blacktail deer, bear, tule elk, upland game and waterfowl. He has also guided in New Mexico, Colorado and Oregon.

Ben grew up in Minnesota. He started hunting and fishing as soon as he could pack a .410

shotgun. His first big game animal was a monstrous ‘ruffed grouse’. He was 15 at the time. That same day he was offered the chance to guide someone, he took the opportunity at that young age and quickly found his passion for guiding. From then on he guided hundreds of clients for numerous species of game in the western United States, and has enjoyed every minute of it.

He now has two wonderful children with his wife, Ruth (a great cook) who works for Wildlife West. His children, Chase and Brook ,have both spent three months a year, every year on the Island. They have also spent many days in the field with dad. Both of them can already handle a gun quite well. Hunting, wildlife management and his family are his passions.

Ben took an interest in nature and wildlife from an early age. Ben naturally guided his formal studies towards wildlife management and received his 4 year B.S. degree in Wildlife Management from Chico State University. While working for his degree, he managed the hunting on the Dye Creek Ranch, near Red Bluff, one of California’s best known wild pig hunting ranches.  It was then that Ben realized he not only had a love for the outdoors and biology/ecology, but he had an eye for game in the field and a good sense for where game would be given the weather, time of day, year, etc.  After ten years of working for someone else and building a name as one of the very best wild boar and deer hunters in Central California, he struck out on his own and started Wildlife West, Inc.  Ben has a tremendous respect for the land, along with a love for ‘the hunt’.

“I really enjoy seeing a first time hunter harvest their first deer or pig.  There is always a challenge to each hunt and I seem to still learn something new every once in a while,” Ben says.

The first opportunity for Ben to guide on Catalina Island for mule deer was in 1998 (with a different outfitter that held the hunting concession).  After three years of deer hunting on the Island, the hunting program ended.  Two years later in the fall of 2003, the Catalina Conservancy, who manages over 80% of the Island, contacted Wildlife West with a proposal to manage the Island’s mule deer herd.  As a result Ben has since been intimately involved with effectively controlling the Catalina Island’s Mule Deer Herd.